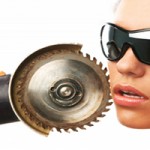 Whatever the cause — obsession with celebrity beauty, economic difficulties, mental illness — some people have found the need to bypass medical professionals and perform complicated surgical procedures on themselves, almost always with bad consequences. Consider these your cautionary tales…

Nail Clipper Circumcision
Hertfordshire, England; June 2009: An unnamed man was admitted to Lister Hospital in Hertfordshire, having circumcised his penis using only a pair of nail clippers. Although the man wasn’t seriously injured and was released the following day, a hospital representative made sure to point out that “this is something we would advise men never to attempt.” Point taken.

Woman Injects Face With Silicone, Realizes She’s “Insane”
Dublin, California; July 2009: A 54-year-old mother of three seeking a more youthful look decided against using a professional plastic surgeon and instead purchased a $10 bottle of liquid silicone online. She injected the substance into her lips and cheeks, and within a day, her face became red and swollen. She had to visit a plastic surgeon to have the liquid — which may or may not have been actual silicone — removed in a process that could require several more surgeries. “Insane,” the woman said regarding her decision. “I can’t believe I did what I did.” Welcome to the club.

Man Removes Own Pacemaker
Bordeaux, France; 2004: In an apparent suicide attempt, a 70-year-old man reportedly removed his own pacemaker. He died of blood poisoning six days later. Doctors hypothesized that the action could’ve been the result of “poor psychologic adjustment” to the pacemaker implant. 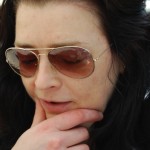 DIY Brain Surgery
Beryl, Utah; February 2000: In an effort to “expand her consciousness,” British citizen Heather Perry, 29, decided to try a procedure called trepanation — basically, drilling a hole in one’s skull with the thought that the release of pressure would improve cerebral function. Since no doctors in Britain would perform the controversial procedure, Perry traveled to Utah, where…no doctors performed the procedure. Instead, she teamed with local trepanatin enthusiasts Peter Halvorson and William Lyons to carry out the operation. Perry injected herself with a local anaesthetic, then used a scalpel to cut into her scalp. With Halvorsen holding the skin away from the skull, Lyons drilled the hole. However, he drilled too deep, severing a membrane protecting the brain tissue. Perry had to be taken to a doctor with brain fluid leakage, but otherwise, she was OK. The incident was filmed for the TV show 20/20, and the media coverage led to Halvorsen and Lyons being convicted for practicing medicine without a license. They received probation. Perry claimed that the procedure was beneficial but added, “My head is a bit of a random one to test it on anyway, particularly as I’d done a bit too much acid to begin with.”

DIY Dentistry
Scarborough, England; March 2005: Frustrated with the lack of qualified dentists in her town, 67-year-old Brit Valerie Holsworth resorted to pulling not one, but SEVEN of her own teeth…with a pair of pliers from her husband’s toolbox…using only beer as an anaesthetic. The public dental care provided by Britain’s National Health Service is currently being upgraded. 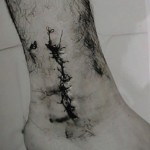 Man Tries to Remove Ankle Implant, Fails
Bedford Park, Australia; 2000: An unnamed 27-year-old male college student had been living with a metal plate screwed into his ankle for five years — the result of drunken reverie — when he decided that the discomfort was too much to bear. Drinking five shots of liquor as an anaesthetic, he used a pocket knife to make an incision in his ankle, then used an Allen wrench to remove five screws — only to discover that the last screw was inaccessible. With nowhere left to turn, he sewed up his wound with a household needle and thread and headed to the hospital, where the plate was removed. There was no damage to tendons, major nerves or vessels; his ego continues to recover.

Genius Digs “Bump” Out of His Arm with Scalpel [VIDEO]
This rocket scientist filmed himself cutting a “bump” out of his arm; not surprisingly, he had to go to the hospital afterward anyway. Warning: not for the squeamish! 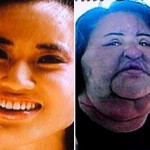 Cooking Oil Facial
Korea; November 2008: Hang Mioku, 48, had been addicted to plastic surgery for 20 years — distorting her face to an unrecognizable extreme — when desperation led her to take a syringe, given to her by a plastic surgeon for silicone injections, and use it to inject cooking oil into her face and neck. Her face grew even larger and more grotesque, and surgery had to be performed to remove 60 grams (2 ounces) of foreign substance from Hang’s face and 200 grams (7 ounces) from her neck.

Brake Fluid Breast Implants
Houston, Texas; August 2003: In what has reportedly become a widespread phenomenon, transsexual Guadalupe Camerena, 32, injected industrial silicone — typically used in brake fluid — into the bodies of fellow transsexual men who wanted to look like women. The silicone was supposed to enhance the men’s chests to more closely resemble female breasts, but instead it caused one of the men, 22-year-old Delfino Gonzales, to die of asphyxiation two days later. Camerena was arrested and sentenced to five years in jail.

Health care specialists also report instances of DIY liposuction, skin stapling, tooth filing and in one extreme case, a man who performed a nose job by removing his own cartilage and replacing it with a chicken bone. Thankfully, this DIY laser eye surgery kit is a hoax.

On the bright side, there are occasions when DIY surgery is not only appropriate, but necessary to save a life: 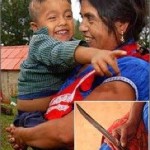 Woman Performs Own C-Section
Rio Talea, Mexico; March 2000: Forty-year-old mother-to-be Ines Ramirez Perez, sitting at home in labor for hours while her husband enjoyed a night drinking at a local bar, took matters into her own hands. Having lost her previous child during delivery three years prior, she became concerned about the growing pain she was feeling. However, in a small town with only one phone for 500 residents, she was unable to reach help, so she grabbed a 6-inch knife, drank a bit of rubbing alcohol to dull the pain and sliced open her abdomen with a vertical incision. She pulled out her baby and cut the umbilical cord with a pair of scissors before passing out. Her six-year-old son ran for help, returning several hours later with the village doctor, who had mother and baby transported to a hospital hours away, where both were deemed healthy and in good shape. No word on if her louse of a husband ever came home.

Hiker Removes Stuck Arm With Dull Knife
Blue John Canyon, Utah; April 2003: While exploring a canyon alone in a remote area of southeastern Utah, 27-year-old Aron Ralston found himself in a precarious situation when an 800-pound boulder rolled onto his right hand, trapping it against the canyon wall. He tried repeatedly to free himself by moving or chipping away at the rock, but to no avail. On the fourth day, running low on water and realizing that he hadn’t told anyone where he was going, Ralston decided to give amputation a try. He used his cheap, multi-use knife to cut through his forearm, but the blade was too dull to make it through the bone. Two more days passed before Ralston figured out how to use his weight to torque his arm enough to cause the bones in his forearm to snap. He then cut through the remaining skin, muscle and nerves. Finally free, he hiked for nearly four hours until he was rescued. Ralston wrote a book about his experience and is now paid five-figure fees as an inspirational speaker.